The roots of our community lie in seventeenth century Hull – dangerous times for Dissenters. There were many occasions when worshippers had to meet secretly in private houses. Although the Elizabethan Church intended to retain and contain its Puritans, the yo-yo of liberty under Cromwell and then the Restoration (of the monarchy) in 1660 meant that many Puritans could not accept reintegration via assent to the Book of Common Prayer in 1662.

What is Puritan religion?

It is the belief in God already knowing your salvation or damnation. They were Trinitarians. Many a Puritan looked for and demonstrated signs of personal salvation. This was achieved through Godly living. You might be favoured with a large income but you didn’t consume. Many were merchants, and made good early capitalists preferring to invest rather than consume. They also built charities. But they also rejected earthly displays of religiosity in favour of a severe simplicity in worship.

The Presbyterian Puritans believed in the broad parish Church, not in the supremacy of the local congregation like the Independents, and they would have preferred to stay in the Church of England. Then the Declaration of Indulgence of 1672 (for only one year) allowed licensed congregations to meet legally. Hull’s libertarian governor, the Duke of Monmouth, made this town a haven for outcasts.

The Puritan Samuel Charles, ordained in 1655 and ejected at Mickleover in 1662, came to Hull and began his ministry when two meeting houses, (Blackfriargate Chapel and the house of Richard Barnes where Joseph Wilson preached) merged. They formed one congregation at Bowlalley Lane in Christopher Fanthorpe’s house in 1680.

The repressive Lord Plymouth replaced the Duke of Monmouth in 1682. This soon led to much fear. When in 1685, the Duke of Monmouth was executed, many Nonconformists, including Leonard Chamberlain, were put under house arrest and feared for their lives. However, another Declaration of Indulgence was issued in 1687 to Roman Catholics and Nonconformists. Bowlalley Lane was reopened and the reverend Charles returned. Then William of Orange replaced James II and Protestant liberties were granted in the 1689 Act of Toleration.

The congregation left Christopher Fanthorpe’s house for a new chapel which was built by 1693. The Trust Deed of 1689 under his name gives no doctrines to be preached: only the worship of God and the administration of the Sacrament. They relied upon their Bibles. Chapels built in this period copied their styles from the London Merchants’ Companies. They had pan-tile roofs, strong benches and alleys between them. Self-government by trustees reflected the guilds’ own governing system too. Samuel Charles died and the next minister, appointed in 1694, was John Billingsley, himself the son of an ejected minister. 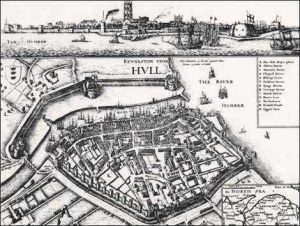 The octagonal chapel in Bowlalley Lane was not built until 1803, and three years later the first declared Unitarian minister, William Severn, a friend of John Wesley and an ex-Wesleyan, took office. Unitarianism (essentially the public denial of the Trinity) was not legal until the year 1813.

Puritan faith changed because it was difficult for wealthy trust leaders to retain a severe and disciplined faith, and secondly they allowed their ministers to be their own preachers of religion. Ministers had to train in the Dissenters’ academies that were seedbeds for different ideas of biblical interpretation, and English Presbyterian chapels did not demand assent to credal declarations of membership. You rented your pew and the minister preached. Thus they evolved and later there was a new distinct movement which argued that the doctrine of the Trinity was not in the Bible; thus an identified Unitarianism inhabited Presbyterian chapels.

Hull Unitarians are grateful to Dr Adrian Worsfold for kindly providing this text.